The Future of Social Robots

Hello and welcome back to Id and Ego – the psychology blog for psychology nerds. ;)

This week: social robots. While it may seem like the stuff of science-fiction imaginings, as time goes on, the line between human and machine grows ever thinner. Could a robot ever really be the equal of a human?  A roundtable discussion between leading minds in the field was released this week.

Technology and the Mind

Throughout psychology’s history, comparisons have often been made between the human mind and the most complex technology of the time. In Victorian times, scientists looked to the automobile for answers. In more recent times, we’ve looked to computers.

To say that our minds are “complex” is understatement. Answers to seemingly simple questions “What is consciousness?” and “What makes us, us?” still elude us. Given this complexity, to even THINK that we could ever replicate a human mind seems laughable and yet, there are scientists at this very moment working to achieve just that. 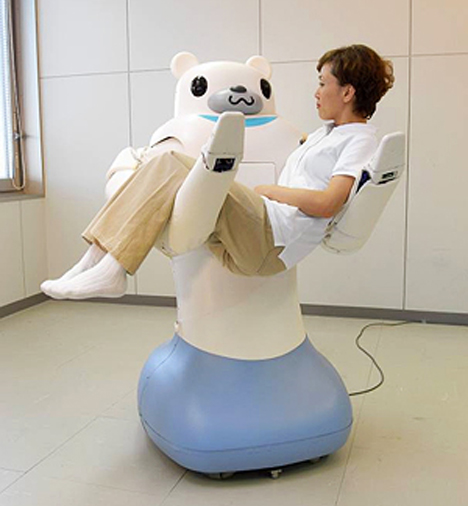 Of course, the Japanese are very much leading the way in this area. They’ve designed a number of robots to perform as “nurses”. The HOSPi for example, can dispense of pick up medications from nurses. RIBA II uses high-precisions sensors to carefully lifted mobility challenges patients from their bed and takes them to a wheelchair.

A little more advanced - RUBI – the robotic “teacher’s assistant” developed in 2010, can teach children vocabulary and songs. RUBI actually uses a video camera to detect the reactions of the children it is teaching. It primary objective – to recognize smiling children and to encourage that verbally and or with gestures – is accomplished with high tech, real-time face recognition technology. To protect it from sometimes less than careful little hands, scientists even taught RUBI to “cry” when its arms were pulled. In the end, with a TV screen tummy a red bandana big eyes and wide grin, RUBI was an instant hit with children and research shows they’re an effective learning tool.

Yet as impressive as this all is, you couldn’t, by any stretch, consider them anything other than machine. THESE robots on the otherhand are taking to things to a whole new level.

“Toyota Partner Robots” – yes, designed by Toyota - are designed to go home with people – to help them around the house, to act as companions.  Yet, it doesn’t speak or look like a human.

Chat bots are body-less robots, which can so convincingly mimic human speech patterns, they can carry on a conversation. Recently a chat-bot to chat-bot conversation was even hosted on NPR.

They spoke about God:

Eerily “Shruti-Bot” even asked “Alan-Bot”, “Don’t you want to have a body?” to which Alan replied with a casual “Sure.”

Just imagine a robot combing all these traits. Given the technology available today, movies like A.I. don’t seem so far-fetched!

But as experts point out, there’s a lot more to it than that.

In all likelihood, a commercially available, human-looking robot is far, FAR off in the future - if it ever would appear. You see, we’ve evolved to be able to detect the minutest of difference in a human face. The way the top eyelid blinks, the way the corners of a your bottom lips moves - get it wrong in just the smallest way and you have an affect called “the uncanny valley.”

It’s a protective evolutionary advantage meant to help us detect signals that person is sick or diseased. It’s also the root of some peoples fear of dolls and clowns. While robotics engineers have gotten really, really close, they have yet to achieve the affect so convincingly it overcomes this inborn trait. (( See left - CREEPY. :( ))

As Ayse Saygin, professor of cognitive and neurosciences puts it “…the appearance is not trivial, and you might want to bypass the issue completely by not getting close to the human appearance because when you do, people are going to expect behavior that is congruent with that appearance. When those expectations are not met, they sense something is off and perceive the robot as being creepy.”

But even forgoing the appearance issue, there’s plenty of other issues to consider – relationship issues.

Just think - if a robot has a convincing personality, how do you ensure its compatible with it's human for the long run? Half of all first marriages end in divorce after all!

And what if your robot breaks? “People already get emotionally attached to their cars, which don’t even push those social buttons, so we have to be worried about the fact that people could get even more attached to a social robot. We need to consider what we can do to make it really transparent that the robot is a machine that can break and might go away or become obsolete.” said Andrea Thomaz, assistant professor of interactive computing and Director of the Social Intelligent Machines Laboratory.

The idea of social robots brings forth no shortage of ideological discussion. It’s even gotten to the point that the South Korean government – known for their enthusiasm for technology – has created a code of ethics for how robots should treat people and even vice-versa – how humans should treat robots!

Could robots ever equal humans?

What do you think?!

Get UP to Get Down

Dead To The World

Love and Logic Parenting: 7 Tips for a Better Parent/Child Relationship

You are here:   The Smart Living Network ► Tech ► Blogs ► The Future of Social Robots
Site Feedback