Last time on Guitar Showdown, we covered strat-style guitars,  a staple to many musicians. We covered 3 different double-cutaway, humbucker-equipped axes that cover a bit of the strat-style spectrum. Today, let's take a look at a bit of a different beast, the single cut acoustic guitar.

Acoustic guitars have many applications in countless genres of music. The tonality of an acoustic guitar is especially important because, typically, it isn't run through a massive pedal board or strange, alien-looking midi device. When it isn't being used in a performance setting, the tone created from the construct of the guitar is under more scrutiny because there isn't a specific pickup and amp combination that compliments the sound of your guitar.

A few days ago, I had the privilege of playing one of these guitars, and I forgot how amazing Gibson is when it comes to acoustic guitars. Typically, I'm not a super huge fan of the Gibby acoustics because, apparently, I'm too much of a pansy... Primarily being an electric player, I find Gibson acoustic guitars feel like too much work to play because of their palm eating necks and percussive action. It makes my little baby, Satriani hands want to cry. The Songwriter, however, tones it down a bit and sticks to pretty tight action, feeling right at home in my

The Good: This guitar seems to strike a great balance between sound and feel. It's a dreadnought but a little bit smaller, so you can get deeper tones highlighted without a super clumsy guitar. The action is very tight, but I've still played guitars with lower high-fret action. That said, the construction is fantastic, build quality is through the roof! The resonance is complimented with a solid spruce top and solid mahogany sides, couple that with the fishman electric system, and you have a beautiful, full-sounding instrument.

The Not So Good: You really can't complain much if you're the owner of this guitar. The biggest thing that alienates me from this guitar is that you need to shell out $2,500 for it...so it's not exactly cheap. The appeal is degraded even more by the fact that $2,500 you can get a pretty solid custom build from a luthier. Not to rip on the build quality of Gibson at all, but a luthier would be able to provide you a wider spectrum of options while keeping the instrument quality high. The electronics interface is somewhat blehh...it gives plenty of control over the sound but, like many guitars, lacks elegance in its design, making use of black sliders on a panel near you. The only other bit I don't like is how it looks, and, by that, I mean the bridge. The pick guard and headstock look fantastic in that classic Gibson style, but the shape of the wood the bridge sits in is unsavory.

Every time I see one of these guitars, my breaths get rapid. I feel that when I play one I'm wearing rose colored glasses because everything about it is amazing! Taylor is one of my favorite guitar companies because of this line of guitars alone. They use spruce for the top, ovangkol wood for the back and sides, and mahogany for the neck. This combination is what I would describe as magical. The tonality of this guitar is super bright! When you play it, it makes everyone around you want to hug each other. 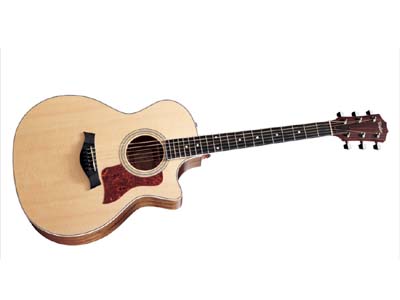 The Good: The feel of this guitar is fan-freaking-tastic! It's like you're with one of your best friends when you have a 414ce in your hands...Come to think of it, with her, I mean its, slim grand auditorium body and venetian cutaway, it's like your with one of your really attractive friends. The electronics aren't just effective, the interface is gorgeous too! Taylor has the simplest and, I think, best looking control system, with just 3 wood knobs that seem to blend with the guitar. The action is tight all the way up the fretboard, and the neck feel makes you want to cry tears of joy. Amidst all this, the guitar is freaking gorgeous.

The Not So Good: This should have been titled "The good things bout this guitar that some guitarists don't like because they're lame," but whatever. A few minor things do plague this guitar. The first is the sound: it's very bright. If you're backing a higher pitched vocalist or playing  finger-style instrumental, this guitar rocks! However, if you're trying to mix with a baritone vocalist or trying to get a really deep, full sound, there are better options. The only other thing that's a downer is the fret markers, they're just dots. That's not special! For the 414ce you'll pay $1900, which is pricey...

I feel weird calling this guitar "the poor man's guitar" because I could even sell this guitar for the price of a few concert tickets. My lack of wealth aside, the $800 price tag is very reasonable for, arguably, one of the best acoustic guitar manufacturers in the world. This guitar is plain looking but an exceptional all-around player. The tonality is that of a classic martin, with a little less of the bass, due to the smaller size of the body.

What's Good: This Martin is definitely a lower-end model, but it's still a quality instrument. The first thing I noticed about the Martin is how wonderful it feels in my hands. It feels like it belongs! The slimmer style of this guitar makes it very wieldy without compromising sound. The feel on the frets is that of a classic martin, firm but not at all abrasive. Also, it has super small, off-set fret markers, another reason I love Martin: it makes you look like a boss when you play it.

What's Not So Good: The Martin, much like the previous guitars, sports a solid spruce top, but, unlike the other 2, it uses laminate instead of solid wood for the rest of the body. Martin uses a high quality laminate, easily out-performing a cheaper brand's solid guitar, but the authenticity just isn't there. Compared to the Gibby's or the Taylor's sustain and tone, this guitar just can't compare.

Buying Kitsch like Sheep to the Rhythm of a War Drum: A Call to Arms

What Makes You Creative?

Where did that come from? Summer 2013 trends