Every once in a while, when looking for an awesome green story to share with you each week, I find a story that elicits within me an immediate YES. The tiny house blog was one of those stories; Livia Firths recycle-chic couture, another.

Well, friends, I have stumbled upon another such story.

As you know, Im interested in green architecture specifically, tiny homes such as those made by the Tumbleweed Tiny House Company. These houses may be, well, tiny, but they pack a powerful punch when it comes to sustainability and living simply. But if its even possible, I have found something that makes the tiny house movement even better: making the houses out of recycled materials. Its called Cargotecture.

The movement really got started when the city of Amsterdam needed student housing that was cheap, mobile, and quick. A company called Tempohousing stepped up to the plate, creating a complex called Keetwonen that contained 1000 housing units that fit those three seemingly impossible requirements. How, you ask?

They were made of old shipping containers, stacked up Lego-style. Behold, Cargotecture:

My love for this movement stems from more than the fact that I keep misreading it as corgitecture. (Can you imagine? Houses made of little stubby-tail-wagging puppies?? I digress). The houses, made of recycled shipping containers, can appear somewhat stark on the outside. But on the inside, they are just as nice as any other house. In fact, its safe to say that the Keetwonen homes are a lot nicer than whatever dorm you lived in during your freshman year of college. Each unit has their own bathroom, kitchen, and balcony, and the walls are well insulated and more soundproof than you might think.

But even if youre judging on purely aesthetic criteria, youve got to admit, they can be pretty beautiful: 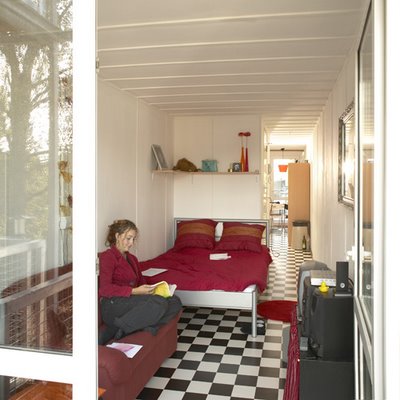 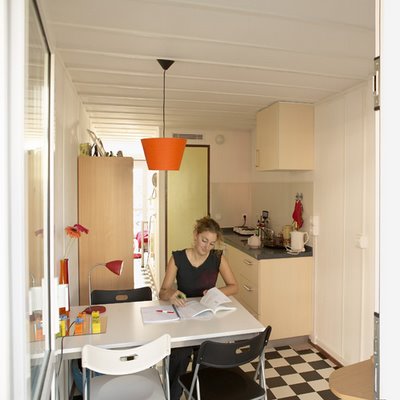 Now, Ill be the first to admit while I do admire certain aspects of minimalism, I cant say Im crazy about the starkness of the metal on the outside of these homes. (Give me a cute wooden peak-roofed Tumbleweed house any day!) Well, it turns out thats not really an issue either. Say hello to the Travelodge Hotel in London, made out of you got it shipping containersnot that youd know it:

Because of the use of recycled shipping containers, the hotel was able to be built 40-60% faster, for 10% cheaper, with a 70% reduction in normal construction site waste. With these buildings, it seems that theres no limit to the benefits or the possibilities.

But even cooler, they have something intriguing that others dont: a world-traveling history. Says Kirk Lance, owner of a Mexican restaurant made out of a shipping container: "This thing, it's had a life. It was born somewhere, and it's traveled the world and hauled millions of pounds of who-knows-what. And it ends up as a little restaurant in a street corner in Portland, Oregon."

As someone who loves imagining up histories for thingsthats pretty tempting. While I might want to dress up the outside a little bit more, I could actually see myself living in one of these homes one day if the situation was right.

Theres much more I could say about these tiny sustainable beauties, but Ill turn it to you, NatuREporters!

What do you think of these little recycled homes?

Would you have lived in one during college?

Would you live in one now?

NatuREport Series
A blog series by Laura Hogg.
Next:Brew Your Own Clothes?! Growing Green Clothing with KombuchaPreviously:The Zero-Trash Family: Could You Do It?

"You Can't Run Your SUV on 'Cute'": Shell Gets Trolled by Greenpeace

Why A Late Marriage Can Benefit Your Health

Work Off That Stubborn Weight: What To Do When You "Hit a Wall"

Poll Shows: Littering is More Taboo than Smoking and Cheating on Taxes

You are here:   The Smart Living Network ► Green ► Blogs ► [NatuREport] Would You Live in an Old Shipping Container?
Site Feedback