Should the Eiffel Tower become the largest "tree" in the world?

Ahh, Paris. The city of love, the city of light - and the city of couture. In keeping with the high fashions of the runway, the Eiffel Tower is in talks to get a brand new, $97 million coat.

This proposal, from French engineering firm Ginger, would mean  that the "Iron Lady" would be covered in 48 varieties of seedlings irrigated by rubber tubing. Once the plants matured, they would be removed two years later - meaning that the tower would be back to normal by 2016. (However, it is worth noting that the tower itself was supposed to be a temporary installation when it was built back in the 1800's.)

The result of this fashion statement?  87.8 tons of carbon dioxide would be removed from the Paris skies. 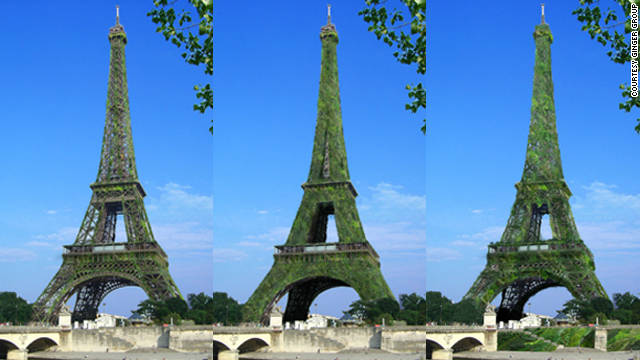 Here's what the tower would look like as the 600,000 plants take root.

"This (proposal) is our call for action," said CEO Jean-Luc Schonebelen.  "We need to think about how we're going to start bringing nature back into the city landscape."

But Schonebelen hasn't yet presented his proposal to the Paris City Council, and he expects to meet with some resistance. After all, it's a risky venture to change such a visible landmark - even if only temporarily.

For my part, I think this is a fantastic idea. I don't think a coating of plants would diminish the stately beauty of La dame de fer; on the contrary, I think it would only add to her appeal. What could be more perfect for the city of love than a draping of greenery that echoes the romance of ivy-covered buildings?

This has the potential to pave the way for other methods of "green" architecture, the effects of which could be felt worldwide. If it catches on, we could see a wave of locales taking proactive steps to counter global warming and beautify their cities at the same time - making it a little easier to breathe, no less.

So in case you couldn't tell, I'd be delighted if the City of Love became the world's leading Green City. But what do you think? Is this practical? Ugly? Would it diminish Paris's appeal, or increase it? Let me know in the comments!

Locavores Under Fire: Is Eating Local Harmful to the Environment?

The 20 most polluted cities in America

Five Reasons Why YOU Should Live La Vida Locavore

Web of Bamboo Lauds the Creative Process and Conviviality

The Healing Power of Indoor Plants

Earth Day: How YOU Can Celebrate

You are here:   The Smart Living Network ► Green ► Blogs ► Should the Eiffel Tower become the largest "tree" in the world?
Site Feedback