To put it mildly, life is rough in Cateura. This Paraguayan town is literally a slum built on top of a landfill – the biggest landfill in the whole country, to be exact. Opportunities are scarce; many families make their money by picking through trash and selling anything that’s worth something. Young people tend to get involved with drugs and crime because, as one young resident says, they just don’t know what else to do with their lives.

But composer and musician Luis Szaran hopes to change that. “The young person who plays Mozart by day,” he says, “does not break shop windows at night.”

Szaran is the force behind Sonidos de la Tierra (Sounds of the Earth), a music-teaching program that has reached over 3,000 people all over South America. His program is the subject of the new documentary Landfill Harmonic, whose trailer was recently released. “Music is an element of social transformation,” he says. The program is free; he purposely designed it so that the poorest of the poor could take part.

The problem? Because of the widespread interest, there weren't nearly enough instruments to go around. Among the 50 aspiring violinists, there were only 5 violins.

Many locals expressed interest in building more instruments, but affordable resources were scarce. That's when they finally realized: the sea of trash underneath the town was really a pile of potential. Local artisans began using garbage as the raw material for flutes, violins, cellos, and all manner of instruments.

Now, when you hear “instrument made from trash,” you’re probably picturing something like this: 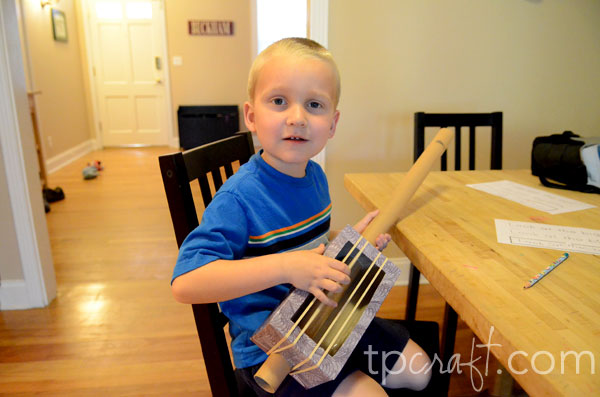 Well, no offense to that craft project – which is awesome – but I’m pretty sure that tissue-box guitars can’t hold a candle to this:

No one involved expected the recycled instruments to turn into anything special - they were seen as a teaching tool. “When we saw [it],” says Szaran of the first recycled instrument, “we laughed like crazy. It seemed like a joke.”

It’s easy to see why they reacted that way when you consider what the instruments are made of: "My violin is made with a fork,” says one young girl.

A boy chimes in: "My saxophone is made of spoons and buttons."

“This double bass is made out of a can of chemical products," says another boy.

“This flute is made with a water tube, coins, parts of cutlery, parts of locks, and other pieces of garbage,” says one young flautist before launching into a solo indistinguishable from one played on an expensive instrument.

What started out as a teaching tool was turned into an orchestra when Szaran and director Favio Chavez realized the potential of the project: “Why don’t we form a group with two or three instruments to show people?" To date, the humble little orchestra has played more than 80 concerts in Paraguay and around the world.

What do you think of the Recycled Orchestra?

What's the most ingenious example of recycling you can think of? Share in the comments!

NatuREport Series
A blog series by Laura Hogg.
Next:The Best of NatuREport 2012: the Trends, the Innovations, and the BizarrePreviously:Rethinking the Refrigerator: How to use nature to store food and save money

This Little Piggy had MRSA (and Decided to Share with Us)

Awesome Green Gadget: 3-D Printer that Runs on Your Recycling

What to Do With Your 401(k) After Retirement

"Show Me the Money!" Credit Scores and the Modern Dating Scene

Trim the Fat on Your Grocery Spending