Challenging long-held assumptions about the way disease is spread, professor Dirk Brockmann and his group at the McCormick School of Engineering and Applied Science hopes to create more accurate models.

Says Brockmann, "Though there are many sophisticated computer models out there to model mobility patterns, we can now expect significant differences in disease model predictions,"

Until now, computer programs predicted the spread of disease on the based on belief that human populations acted like chemicals being stirred in a container - people being thought to interact and travel randomly and each container thought to represent a city. It was assumed that when people travel there, they become inextricably merged with the contents (people) of that container. However, according to Brockmann, that's not necessarily the case.

"Most of the time that's a pretty good assumption…But it's not realistic….Most people don't randomly travel from place to place; they travel somewhere, then come back home. Travel again, then come back home…They have a base location…They don't wander around like a fox in the woods… since you always return home, you don't carry the disease to as many places as we assumed in previous models…This has been previously overlooked in mathematical epidemiology research,” explains Brockmann.

Using his new model for predicting disease spread, Brockmann and his team have already found that the “wave” of disease actually reaches a maximum speed and then levels off.

"We've shown this basic mechanism that wasn't known before…Now we need to see just how it impacts specific diseases."

Amidst a critical, nationwide blood shortage in the US and donation rates of less than 1% of the populations in over 70 other countries worldwide, the first injection of lab-created red blood cells into a human donor was a success.

Using hematopoietic stem cells, a Paris-Based reaserch team was able to grow billions of cultured red bloods cells (cRBCs) in petri dishes. Though there were previously some doubts on whether these cells would ever fully mature and function like normal red bloods cell in the body, animals tests and this first human test, shatters that worry. cRBCS survived a total of 26 days in the body, comparable to the 28 days your average red blood cell lives.

Says professor Luc Douay, MD, PhD, "There is a dire need for an alternative source of transfusable blood products, especially with the risk of infection from emergent new viruses that comes with traditional transfusion…The results from our study establish the feasibility of the concept of transfusing cRBCs and show promise that an unlimited blood reserve is within reach…Although the full-scale production of these cells will require additional technological advances in cell engineering, we believe cRBCs could prove to be a valid alternative to classic transfusion products that will not only provide an adequate supply of blood, but reduce the risk of life-threatening complications and infections that can accompany traditional transfusion."

The familiar parental saying “a little dirt can’t hurt”, rings more true than ever as a common soil bacterium has been found to successfully kill cancerous cells. Researchers have overcome a difficult hurdle of bringing a new cancer therapy to trial as  treatments must be shown safe to healthy cells while they destroy cancerous ones. This particular bacteria strain, clostridium sporogenes, can only survive and feast on dense, oxygen-deprived tumors.

Explains lead researcher, Professor Nigel Minton,"Clostridia are an ancient group of bacteria that evolved on the planet before it had an oxygen-rich atmosphere and so they thrive in low oxygen conditions. When Clostridia spores are injected into a cancer patient, they will only grow in oxygen-depleted environments, i.e. the centre of solid tumours. This is a totally natural phenomenon, which requires no fundamental alterations and is exquisitely specific. We can exploit this specificity to kill tumour cells but leave healthy tissue unscathed… This therapy will kill all types of tumour cell. The treatment is superior to a surgical procedure, especially for patients at high risk or with difficult tumour locations.”

The developed strain is slated for clinical trials in 2013 and, if successful, this friendly soil bacteria could very well become the frontline of cancerous tumor treatment from then on!

A new study on peer pressure appears in the Proceedings of the National Academy of Sciences this month.  In it, a multinational team of researchers measured the brain activity of participants while gambeling either alone or against a peer.

According to their findings, the reward center of their brains, the striatum, and their social reasoning center, the prefrontal cortex, are both more active when participants gambled and beat a peer than when they gambled and won while alone.

Those who beat a peer were also found to engage in more risky, competitive behavior in subsequent lotteries.

Lead researcher, Georgio Coricelli, explained it this way – the risks our ancestors took were safer when done in a group, while risks taken alone could very well be deadly.

Additionally, he says, “Among animals, there are strong incentives for wanting to be at the top of the social ranking… Animals in the dominant position use their status to secure privileged access to resources, such as food and mates….These findings suggest that the brain is equipped with the ability to detect and encode social signals, make social signals salient, and then, use these signals to optimize future behavior,"

Though phthalates have been linked to health problems for a long time now, a new study shows concrete evidence of their effect on the mental and motor development of children whose mothers experienced high exposure during pregnancy.

In this study, 319 non-smoking inner-city women who had children between 1999 and 2006 had their urine screened for four unique markers of prenatal phthalate exposure.

Lead researcher Dr. Robin M. Whyatt points out that phthalates, like other endocrine disrupters, affect the hormonal systems of the body, impacts the function of the thyroid gland and lowers testosterone levels which play a critical role in a child’s brain development.

"The results add to a growing public health concern about the widespread use of phthalates in consumer products." says Dr. Whyatt.

Though many people think fat and carbs when they think of potatoes, Professor Joe Vinson says it’s a reputation they don’t deserve.  Vinson explains it’s the frying, condiments and toppings that are the guilty parties in the potato health equation.

Plain, cooked potatoes themselves pack dozens of important phytochemcial and vitamins - and in only 110 calories a pop! “We hope our research helps to remake the potato's popular nutritional image." He says.

In his new study, 18 overweight/obese patients with high blood pressure ate between 6 and 8 plain, microwave cooked, golf-ball sized, skin-on, purple-skinned potatoes twice daily for a month.  Vinson explains he selected the dark skinned potatoes  because they are especially rich in phytochemicals and advised microwave cooking, because it appears to be the best way to retain the nutrients of cooked potato.

By the end, both the average diastolic and average systolic blood pressure levels dropped – by 4.3% for diastolic and by 3.5% for systolic.

And, as an added note – none of the study participants gained weight during this study. 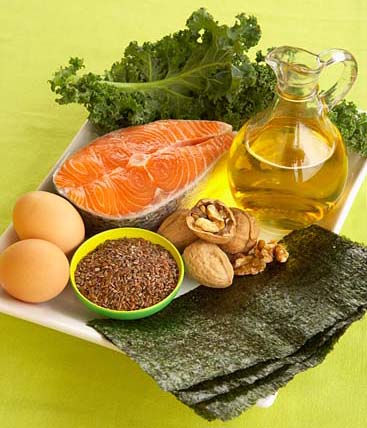 This month’s Journal of Physiology features a study which directly links a mother’s diet during pregnancy to her baby’s risk of developing allergies.

PFUAs are believed to improve the way intestinal immune cells distinguish between harmful and harmless substances – making the baby less likely to suffer from allergies (Allergies being an inappropriate immune system which treats harmless foods and substances as germs it should attack).

Dr. Gaelle Boudry explains the results stating "The end result is that the baby's immune system may develop and mature faster -- leading to better immune function and less likelihood of suffering allergies” and adds,“Other studies have found that a diet containing fish or walnut oil during pregnancy may make your baby smarter -- our research adds to this, suggesting such supplements also accelerate the development of a healthy immune system to ward off food allergies."

Why Do Patches Of Endometriosis Cause Pain & Health Problems?

What Are the Symptoms of Endometriosis?

Hyperthyroidism or Hypothyroidism? When you should be visiting a thyroid doctor

Exercise for Your Brain