By Laura Hogg
From the Laura's Culinary Adventures Blog Series

My boyfriend, Chris, is one of those annoying people that just instinctively knows what's going to taste good in any given recipe. Actually, he doesn't even need to follow a recipe: he just throws ingredients together - and it always turns out amazing. How is that fair?!

Okay, I'm exaggerating a little bit. I'm not actually annoyed by Chris's superhuman ability to know what will taste good together. Mildly jealous, maybe, but mostly, I'm in awe - and I'm really grateful to have him by my side as I attempt to navigate the scary unknowns of the kitchen.

He was a big help to me in this second installment of my cooking chronicles. Last week, I made black bean burgers, very carefully  following a simple recipe I found online. This past weekend, Chris helped me venture out into the great unknown: changing a tried-and-true recipe. Gulp.

I used this recipe, with ingredients as follows:

1. Sauté the onions until they're soft.

2. Mash up the black beans in a bowl with a potato masher until they're fairly smooth.

3. Mix in all the ingredients except for the oil and the flour. Add the flour to the mix a little bit at a time.

4. Once the flour is spread throughout, form the mixture into patties and fry in a small amount of oil. Makes approximately 4 burgers (the original recipe said six, but I don't believe them).

That's it. Seriously. Sauté, mash, mix, fry. And if I can make them, anyone can!

The first time I made them, at the suggestion of one of the people who had commented on the recipe, I added approximately 2 tablespoons of salsa to help the mixture stick together. I was very proud of myself for my bravery in straying from the recipe, and gave myself a well-deserved pat on the back.

Off the beaten path

This past weekend, I was feeling brave and inspired again, so I decided to give it another go when Chris came over. We followed the instructions, but added:

Can you guess whose idea it was to add those last two ingredients? It went something like this:

I was hunched over, furiously mixing up the beans and bread with my trusty potato masher, when a voice came from across the kitchen, where Chris was slicing up the veggies:

"Do you want to add some curry? And why don't we try adding a bit of honey, too?"

I turned around. Everything was slow motion, and the colors drained until everything around me was black and white. Suddenly, Chris was wearing a trench coat and a fedora; I caught my reflection in the window and found that I was wearing red lipstick and looked like Ingrid Bergman.

"You're mad!" I cried, clutching my pearls. "Curry and honey in a burger? You're just drunk with the rousing success of the outrageously delicious peanut curry* you made last week!"

*Recipe to follow sometime in the next few weeks.

**Author's note: almost none of the preceding scene actually happened.

So, feeling adventurous, I drizzled a little bit of honey over the mixture - not much, maybe a couple teaspoons - and added roughly 1 tablespoon of curry. I suggest just adding it in a little bit at a time, tasting a little bit as you go. "Raw" veggie burgers don't carry the same risks as raw beef, so taste away! 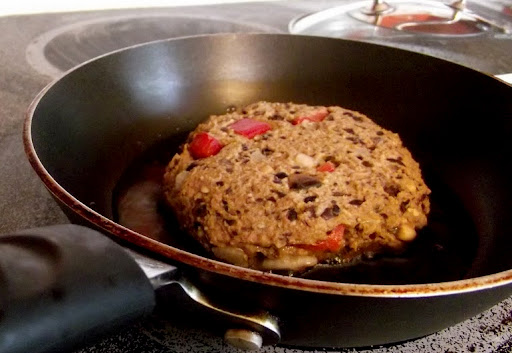 The verdict on this one was love it - with some changes. I was a little bit absentminded while we were making the burgers, so I kind of forgot to sauté the vegetables. Silly, I know, but it still tasted fine. Chris and I agreed that next time, we would sauté half of the vegetables and leave the other half raw - that way, you get the benefits of raw veggies but the taste of sautéed. A good compromise, I think. And, despite all the drama of adding the honey and curry - I think we could have added even more. Next time!

We both agreed that this recipe is fun because of all the possibilities.  I plan to try other varieties with his help, and if we hit on some other incredible combinations, I will definitely keep you posted!

Who knew? Apparently, this whole cooking thing is actually pretty fun. Especially when you have a knowledgeable sidekick. 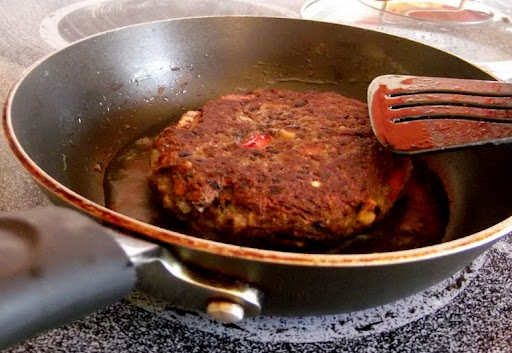 The Whole Truth About Low-Salt Diets

Living to Eat or Eating to Live?

10 Tips for a Mother's Day Breakfast in Bed