To people who know me, that's pretty much the understatement of the year. But since most of you don't know me, let me just say it again: I really love almond milk.

The first time I heard about this delicious dairy alternative, I was skeptical. I was at my favorite coffee shop, and I wanted to make sure they had soy milk, so I asked the barista: "What kind of milk do you have?" And she was quick to respond: "We have fat-free, whole, soy, and almond."

Almond? I thought. How on earth do you milk an almond?

I didn't try it that day. I stuck with my usual soy and promptly forgot about the existence of almond milk. That is, until I started dating Chris, who has sensitivities to both dairy and soy. He always talked about how delicious almond milk was - and once I tried it, of course, I found out that he was right. It's smooth and creamy and comes without the digestive discomfort I get with cow's milk and the breakouts I get with soy milk. I absolutely love it. Not the kind of love where I doodle "LAURA + ALMOND MILK" in my notebooks, but, you know, pretty close.

The old me would have been happy to continue buying it in the store forever. But the new me doesn't want to rely on the store all the time. Sure, when I'm in a rush, it's nice to have a supply of store-bought almond milk ready to go. But when I have time, the homemade variety is a wonderful treat.

Okay, enough rambling. To the recipe!

First, soak the almonds in water for 4-8 hours. I soaked mine overnight, and then found that I didn't have time to make the milk the next day. That's fine - just dump out the old water and replace it with fresh. Soaking them makes them nice and plump, and makes this process a lot easier on your blender!

(If you bought your almonds blanched--with the papery skins removed-- you can skip this next step.)

Next, peel off the skin of each almond. It's not hard, but it's definitely time consuming. This is where I recommend having an assistant - not because it's difficult, but because the help and conversation make the time go by faster. As usual, Chris was my assistant! 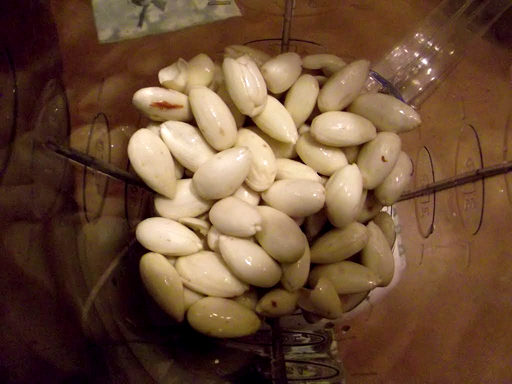 Anyway. With the almonds soaked and the skins peeled, it's time to milk 'em!

Put the almonds in the blender, along with 1 1/2 cups of water. Blend until it forms a paste (around 1-2 minutes) and then blend in the honey, cinnamon, and the rest of the water. If you want a more plain milk, you can leave out the sweeteners, but I think it's a real treat if you leave them in. 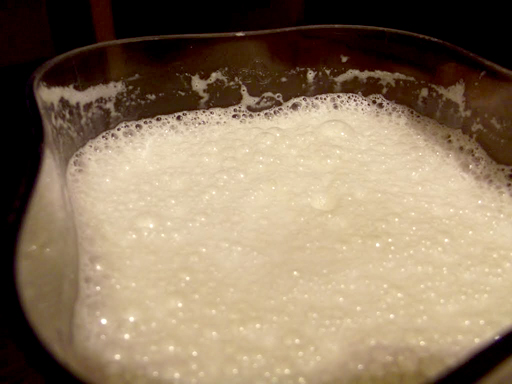 Technically, you could leave it as is - but it will be much smoother if you strain it. So line your strainer with 3-4 layers of cheesecloth, put the strainer over a bowl, and pour. 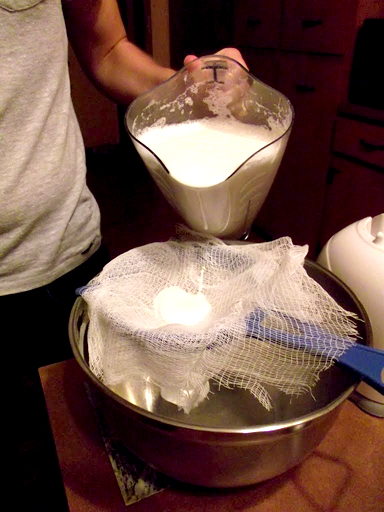 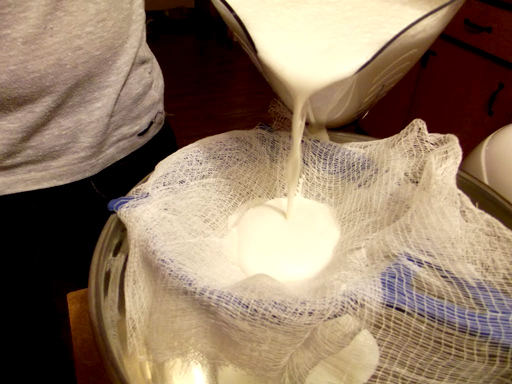 As you pour, it's helpful to use a spatula or spoon to press down the solids. This will help it go faster, and also squeeze out more milk. 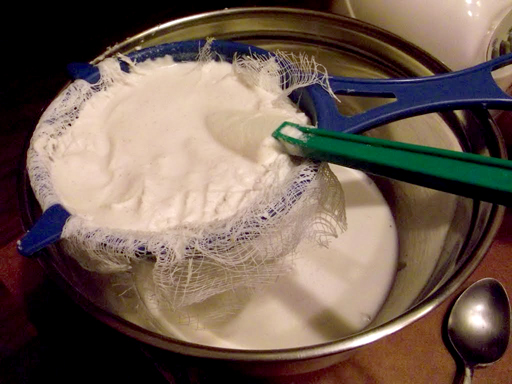 At this point, we measured how much milk we had gotten out  of  this recipe: 3.5 cups. The recipe I followed had said it would yield 4 cups. I have to say, I was disappointed. So I picked up the cheesecloth full of solids and I squeezed and squeezed - and a lot more milk came out! In all, squeezing the solids got us over another half cup, so I would definitely recommend doing that to get the most out of your time and money.

This should come as no surprise, but I loved it! It was so smooth and creamy and delicious. I drank it from a glass and I had it on my cereal, and it was great both ways. It felt like a real treat to drink, and it came with the bonus satisfaction that I didn't have to rely on the store-bought variety. My mom wouldn't stop raving about it, either, so it was definitely a success! This milk will keep in the fridge for around 3-4 days, but it's so wonderful, I doubt it would last that long.

Our little story does have a bit of a sad ending, however. The milk has a tendency to separate, which is completely normal and doesn't mean it's gone bad (just stir it up and it's fine)...but my sister didn't know that, so she thought it was spoiled and threw it away the afternoon after I made it. I was devastated, but I'll be sure to label it next time so it doesn't happen again! 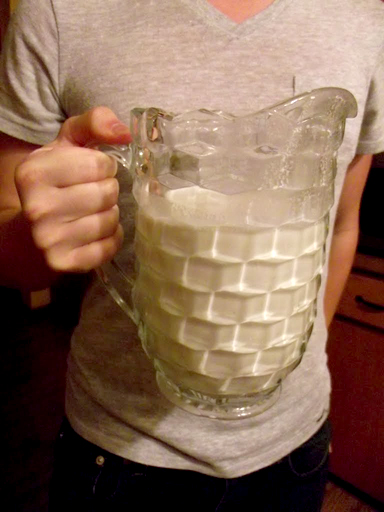 If you don't want to waste the leftover almond solids, you can dry them out in an oven on low heat to make almond flour, or you can leave it as a paste and use it in desserts. Yum!

Is Almond Yogurt the Better Choice?

Can a Gluten-Free Diet Benefit People Without Celiac Disease?